Winning The Battle Within (book) 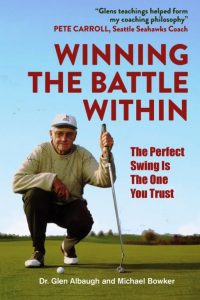 WINNING THE BATTLE WITHIN
Digital Edition

This book is a real treasure for those who love to play golf. Not only will you come away with new and refreshingly new strategies for practicing and then taking your game to the course, you will make an extraordinary leap in your enjoyment of the game. By learning how you can choose to be confident, how to remain in control of your game through positive self-talk, and how to master your fears, this book can lead you directly to the winner’s circle.

As one of the preeminent consultants in the field of Applied Sport Psychology, Dr. Glen Albaugh has coached the practical application of optimal sports performance to thousands of athletes and coaches of all levels. His college and high school clients have won state, national, and NCAA championships, while his PGA, LPGA and Champions Tour clients have won more than 50 events, amassing more than 70 million in winnings.

Dr. Albaugh has been a lifelong champion of inner game performance skills. His development of athlete-centric self-coaching models in the 1970s, along with work by contemporaries including Bob Rotella, Bruce Olgivey, Keith Henchen, Ken Ravizza, and Rich Gordon, played an influential role in the development of the Association for Applied Sport Psychology.

In 1989 Dr. Albaugh traveled to Russia, with Legendary Hall of Fame 49ers coach Bill Walsh and Michael Murphy of the Esalen Institute, to study Soviet Olympic athlete training and coaching programs. Those meetings influenced the direction of American performance-based coaching paradigms from the Olympics to professional sports to colleges, high schools and youth coaching. Nearly every player on Tour today has a mental skills coach on their support team with roots tracing back to Dr. Glen.

Dr. Albaugh is Professor Emeritus at the University of the Pacific. He received his Ph.D. from the University of Utah in 1970, and then joined the Pacific faculty, where he taught for 28 years. Former students include Hall of Fame football coach Bill Walsh, and Pete Carroll, Seattle Seahawks head coach. Dr. Albaugh was also the Pacific Men’s Golf Team head coach for 16 years, leading them to 15 NCAA Championship appearances. He was inducted into the Pacific Hall of Fame in 1983, and received the coveted Pacific Mentor Award in 2016.

An international keynote speaker, Dr. Albaugh has conducted numerous workshops for the PGA, LPGA, and Nationwide Tours, as well as the PGA of America and the National College Coaches Association. He was awarded honorary lifetime membership in the Northern California PGA in 2016.

“What are your goals when it comes to golf ? Better yet, what are your dreams? What do you deeply enjoy about the game? What kind of golf do you long to play? As you think about your answers to these questions, do you immediately think of your swing mechanics? Probably not.

Golf is not about the perfect technical swing. It is so much more. And that is why this book about golf is so important. Dr. Glen Albaugh shares the methods he has developed and taught to me—and many other players of all calibers for decades. It is an invaluable reference for amateurs and professionals alike.” Scott McCarron, 2019 Schwab Cup Champion

“Glen Albaugh has long been my teacher and friend. His teachings helped form the foundation of my coaching philosophy. Every athlete has something to learn from Glen. He combines a wealth of knowledge about sports, golf in particular, with an integrated vision steeped in Eastern thought and the Human Potential Movement. The result is a riveting set of lessons, mental strategies and hands-onpractice drills that combine to prepare golfers to achieve peak performance.

For more than three decades, Glen has maintained an unwavering commitment to coaching and teaching. Now, in cooperation with a variety of players—from champions like Scott McCarron and Kirk Triplett, to players who dream of breaking one hundred—he presents a cutting-edge approach to the game that is unparalleled in its wisdom and practicality. I especially like his approach to practice, which mirrors the newest thinking of top coaches in football and many other sports, and guarantees golfers more efficient and consistent performance. This is a good book. It should be in every golfer’s library.” Pete Carroll, Seattle Seahawks Head Coach

Think Your Way Around the Course